Sen. Joni Ernst said the reauthorization of the Violence Against Women Act was a significant bipartisan accomplishment that will help survivors and advocates in Iowa and across the country

(Read the original article on The Daily Iowan) 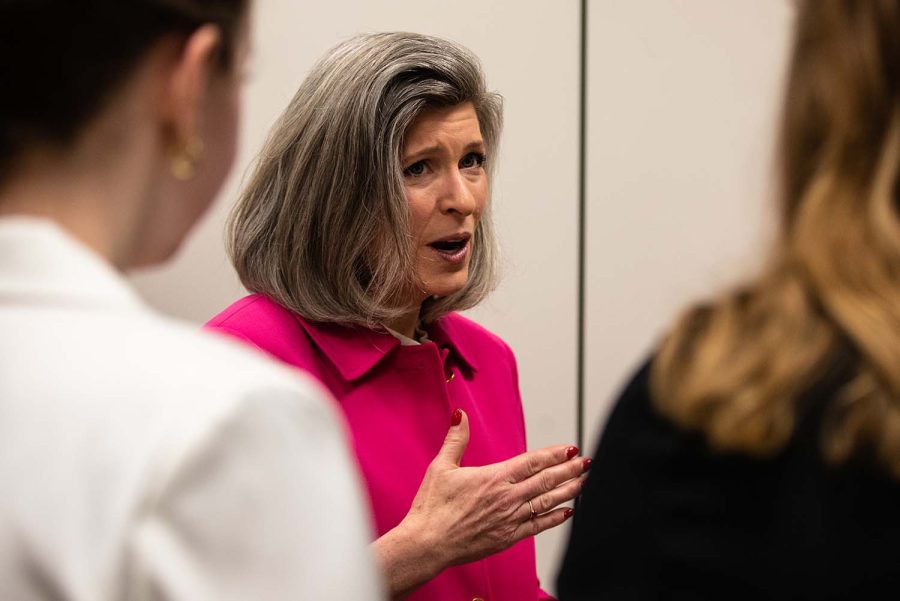 Renewing the Violence Against Women Act was incredibly important personally, and for advocacy groups across Iowa and the country, Sen. Joni Ernst, R-Iowa, said in an interview with The Daily Iowan.

“For survivors, just so they know that we’re here and we are providing those resources necessary for them to move out of really difficult circumstances,” Ernst said in the interview at her D.C. office.

The Violence Against Women Act was initally passed in 1994 and must be renewed every five years. It recently passed again as part of the bipartisan spending bill in March.

“This bill touched so many different committees in the United States Senate,” Ernst said. “It was important to have buy-in from all of them, and we were able to get it done.”

The Violence Against Women Act Reauthorization Act includes several provisions the Iowa junior senator fought for, Ernst Communications Director Brendan Conley said. These include prohibiting federal officers from engaging in sexual acts while on the job or with an individual who is under arrest.

Additionally, the reauthorization increases funding for education and survivor assistance programs. It doubles support for the Rural Domestic Violence Assistance Program and the Rape Prevention and Education Program, as well as more than doubling support for the Sexual Assault Services Program.

The law will also expand access to medial forensic examination for sexual assault survivors in rural areas and ensure that the National Resource Center on Workplace Response program services are available to businesses with fewer than 20 employees as well as public-sector businesses.

Ernst credited Democrats who collaborated on the bill, including Sen. Dick Durbin, D-Ill., who used his influence on the Judiciary Committee, as well as Sen. Lisa Murkwoski, R-Alaska, who Ernst said helped her with the tribal piece of the bill.

“Three years of effort went into that bill, a piece of legislation, and again, another just phenomenal bipartisan effort of so many,” Ernst said. “I want to give a huge kudos to my dear friend [Sen.] Dianne Feinstein [D-Calif.]. She has partnered with me from day one on this effort, and she stuck with it even when there were product naysayers out there, you know, telling her to back off. She was always encouraging and saying, we’re going to get this done.”

Sen. Kirsten Gillibrand, D-NY, has worked with Ernst on legislation addressing sexual assault in the military.

“Congress did its job in passing the reauthorization of the Violence Against Women Act, which will support survivors and help to prevent incidents of domestic violence and violence against women, both of which were exacerbated by the pandemic,” Gillibrand said in a statement shared with the DI. “Senator Ernst and I share a focus on finding common ground and the reauthorization of this important law shows what Congress can accomplish when we work together in a bipartisan manner.”

Mónica Ramírez, president and founder of Justice for Migrant Women, said the reauthorization was a critical step toward creating a safer space for survivors.

“As we imagine and fight for a world free from violence, we support VAWA and continue to advocate for policies that protect immigrant survivors and survivors from historically marginalized communities,” Ramirez said in a press release shared by Ernst’s office on March 18.

“By strengthening and restoring Tribal jurisdiction and providing necessary resources to Tribal governments through VAWA, Tribes will be better equipped to keep their communities safe and ensure justice for Native women,” said Lucy R. Simpson,  executive director of the National Indigenous Women’s Resource Center in a press release shared by the organization on March 11.

Maria Corona, executive director of the Iowa Coalition Against Domestic Violence, said this reauthorization will respond to the needs of diverse populations through culturally-specific programs.

“Every time Congress has reauthorized VAWA, they have strengthened it to improve protections and access to safety and justice for all survivors,” Corona said in a statement provided by Conley. “We want to thank Senator Ernst for introducing the VAWA reauthorization to the Senate today and her steadfast efforts and advocacy to gain bipartisan support for this critical piece of legislation.”